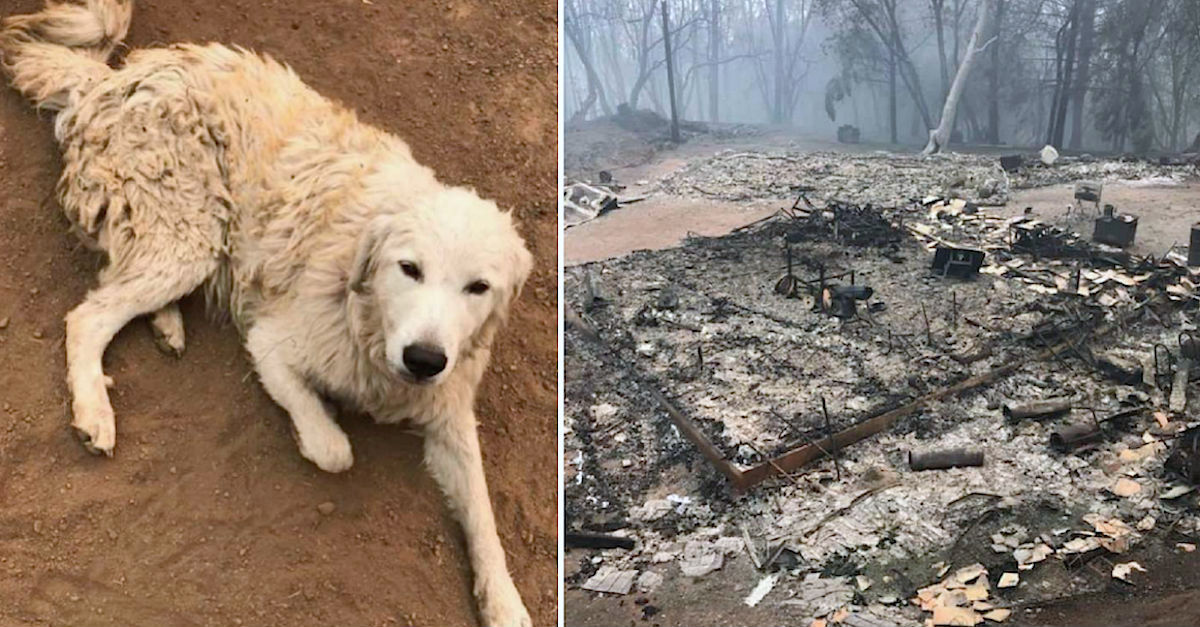 Like so many others, Roland Tembo Hendel lost his home and farm to the raging wildfires that have been plaguing Northern California.

His hand-built house, his truck and his workshop were all turned to ash. 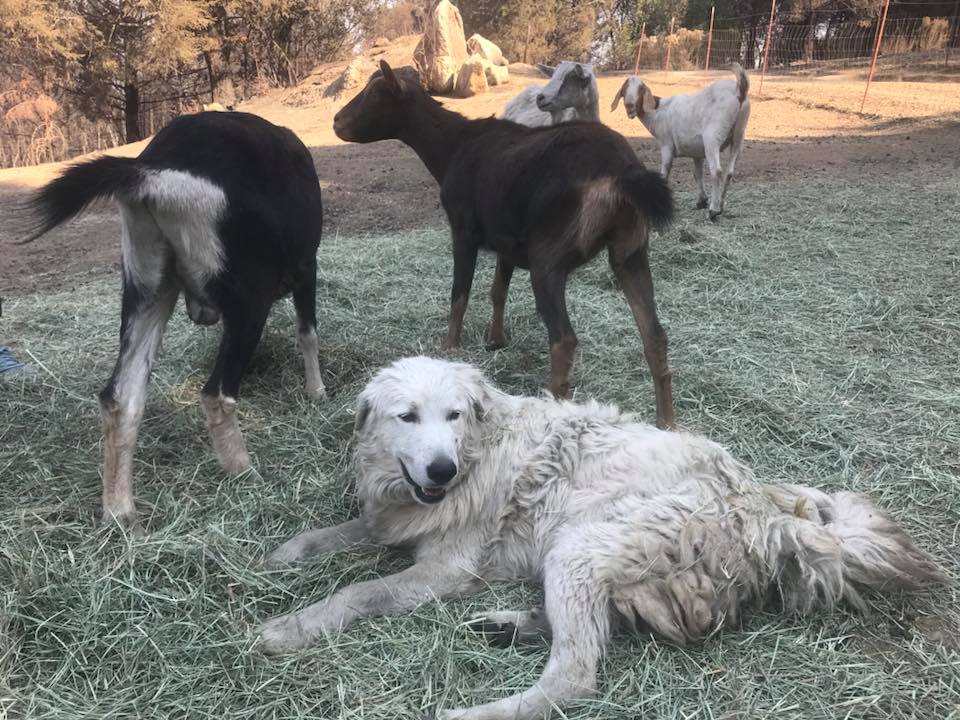 Odin refused to evacuate with Roland when the fire consumed their Sonoma County property.

Roland recalled, it all started around 10:30 in the evening when he first smelled smoke.

He and his family had no warning, but by 11 pm, he could see flames on the horizon, and minutes later, he could feel the heat as the fire headed straight to his Sonoma County property. 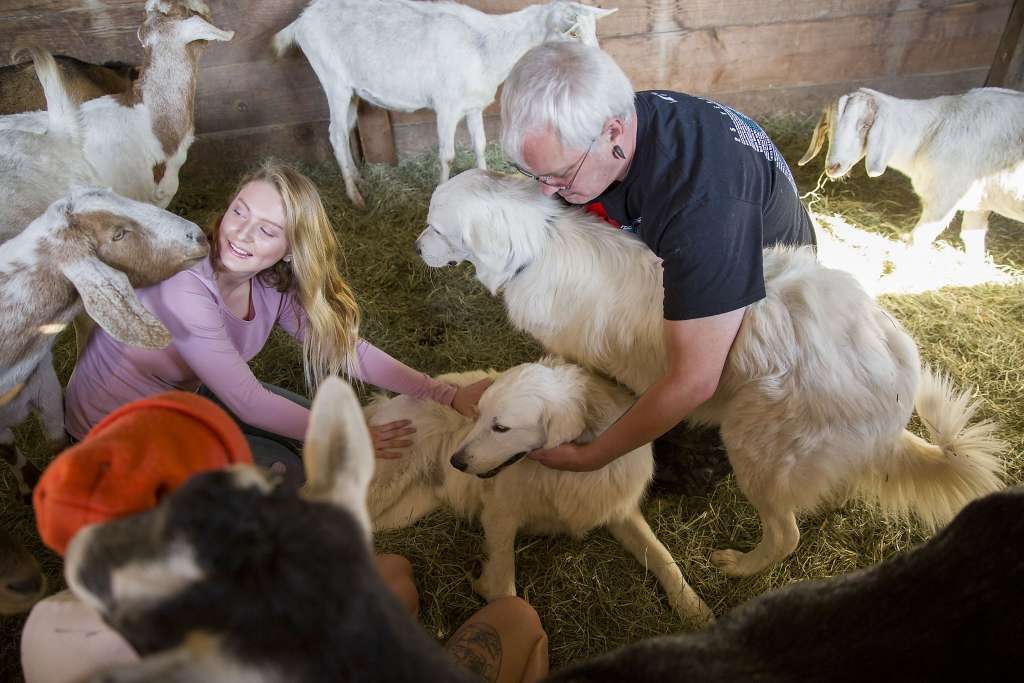 Roland and daughter Ariel, showing love to their animals.

Roland immediately woke up his daughter, Ariel and loaded their cat and dogs in the car. Sadly, there was no room for his eight goats. All he could do was open the gate and hoping that they would flee to safety. His dog, Odin refused to leave the eight goats. Roland tried to persuade his "stubborn and fearless Great Pyrenees," to jump in, but Odin wasn't having it.

He had to put his daughter's safety first, and there was no time to spare as the fire got bigger and he saw the sky turning orange, Roland was forced to make the hardest decision of his life and tearfully left Odin and the goats behind. 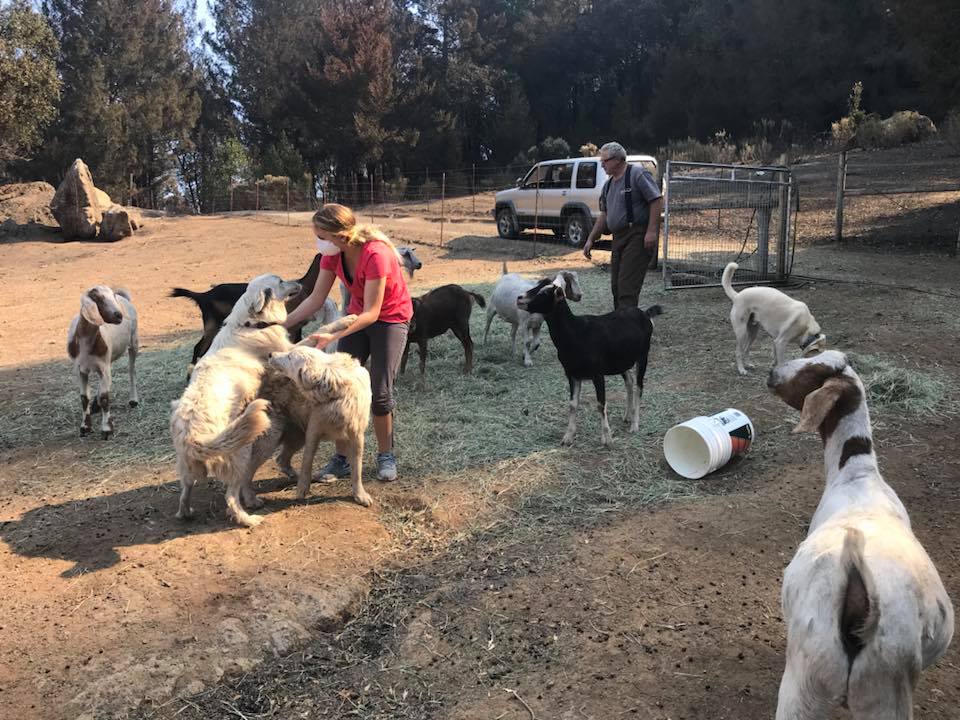 Roland and Ariel can’t believe their eyes that Odin and 8 goats survived.

He describes that terrifying night:

“Despite the sounds of exploding propane tanks, twisting metal, and the hot swirling winds, Odin refused to leave our family of 8 bottle-fed rescue goats. Hours later, when we had found relative safety, we cried for Odin and our goats. I was sure I had sentenced them to a horrific and agonizing death.”

But when Roland returned to his property, he was in for a shocking surprise.

“Days later, when we were able to make it back to the property, we found a burned, battered, and weakened Odin, surrounded by his eight goats and several small deer who had come to him for protection and safety. 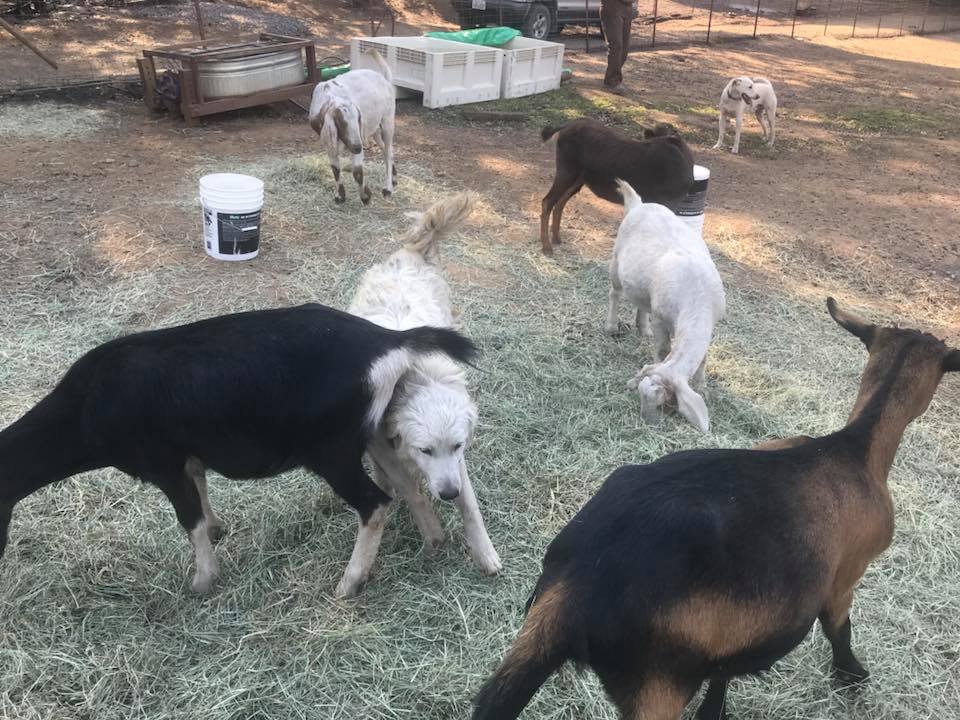 Odin playing with his goat friends.

“Eight goats came running to see us and get cuddles and kisses.” All the goats had survived—one had a slight burn, but they were otherwise completely unharmed.

Odin was weak and limping; his once thick and beautiful coat singed orange, his whiskers melted. Even now as I write this, I am crying tears of gratitude and awe at his bravery and devotion.”

“It’s amazing he’s in such good spirits. He doesn’t show signs of being traumatized at all. He’s just really happy,” Roland said.

Odin, the hero dog and his sister Tessa, with Roland

Despite the intense, devastating heat and wind, Odin refused to leave his goats. Instead, he protected them– and some newly adopted deer– so that not a single life was lost. Thankfully, the heroic pooch is already getting stronger and will make a full recovery.

The story of Odin’s heroism quickly went viral. Now Odin has his own Facebook page, and the YouCaring profile has raised $73,500 of the family’s $45,000 goal. The money will, in part, go towards repairing the animals’ barn and establishing a fresh water supply for them. The family is donating the excess to the Sonoma County Wildlife Rescue Center: “this will provide care for animals affected by this tragedy, that Odin could not care for himself.”

“One of the happiest sights in the world comes when a lost dog is reunited with a master he loves. You just haven't seen joy till you have seen that.”